Donald Trump has told Apple that it should make its products in America if it wants to avoid tariffs set to be placed on imports from China. The US president told the world’s most valuable company: “Start building new plants now. Exciting.” He took to Twitter to make his position clear after Apple wrote to government officials saying the proposed import levies would increase the prices of a “wide range” of its gadgets, including its watches, headphones, smart speakers, chargers, cables and cords. 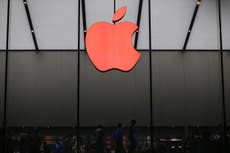 "Because all tariffs ultimately show up as a tax on US consumers, they will increase the cost of Apple products that our customers have come to rely on in their daily lives," the company said in a letter to the Office of the United States Trade Representative.It added: “The burden of the proposed tariffs will fall much more heavily on the United States than on China.”But Mr Trump responded by saying: “Apple prices may increase because of the massive Tariffs we may be imposing on China – but there is an easy solution where there would be ZERO tax, and indeed a tax incentive. Make your products in the United States instead of China.”

Apple – which became the world’s first $1 trillion company last month – is highly exposed to a trade war between the two countries on two fronts.

Because it makes many products for the US market in China, it would be hit by American tariffs. But, because it also sells its gadgets in China, it may also become a target of potential retaliation taxes.  The US is set to impose its package of $200bn in tariffs in the coming days.

USA Apple trump
BLOG COMMENTS POWERED BY DISQUS
Cookies make it easier for us to provide you with our services. With the usage of our services you permit us to use cookies.
Ok