A widespread power outage Saturday evening left much of Manhattan, including the Upper West Side and Rockefeller Center, without electricity, authorities say. The partial blackout was caused by a transformer fire, according to New York fire officials.  New York City Mayor Bill de Blasio said that the New York Police Department has confirmed there was no foul play, "this was a mechanical issue."  By late Saturday night, officials said power was being restored to thousands of customers. "Power has been

today's blackout, but New Yorkers should continue to exercise caution as everything returns to normal," Gov. Andrew Cuomo said on Twitter late Saturday. "When things are at their worst, New Yorkers are at their best, and they were at their best tonight."  At the height of the outage, about 73,000 customers were affected, according to John McAvoy, CEO of Con Edison. He said the utility hopes to have power "restored to all customers, hopefully, by midnight tonight." New York authorities said there were no reports of fatalities or injuries.

Cuomo said he has directed a state agency to conduct an investigation into the blackout. He said in a statement that although no injuries have been reported “the fact that it happened at all is unacceptable,” and the Department of Public Service will investigate the blackout. Cuomo said he has called in the National Guard to help with traffic and safety issues.  “They (Con Edison) told me earlier it would be one or two hours and now it is several hours,” Cuomo said. “So I just want to make sure we are prepared.”

Corey Johnson, a New York City Council speaker, said on Twitter that power is coming back in the Hell's Kitchen neighborhood. Several Broadway shows have been canceled for tonight, including "Harry Potter and the Cursed Child" and "The Cher Show," according to Broadway World. Carnegie Hall was evacuated due to the loss of electricity. The Metropolitan Transportation Authority tweeted that there are “extensive delays on many subway lines.” Subway riders told ABC7NY that the “trains just stopped” and while “some people felt like they were losing oxygen,” other people were “helping each other.”

Several subway stations are without power and were being bypassed by working trains, the transit authority tweeted. The Metropolitan Transportation Authority tweeted that there were outages at various underground stations. Above ground, as drivers attempt to navigate streets with no , frustrated pedestrians weaved in between stop-and-go traffic on the stretch of road three avenues west of Times Square.  Rami Eskelin, who works at a Dunkin’ Donuts on 10th Avenue, said he initially thought the outage affected just the store he worked at, “until you walk outside and see the power was out for several blocks, all the way up to 64th Street.”

He and his boss began selling $1 coffee and donuts on the street to save inventory from spoiling.  “At first we were going to close the store like all the others, but we wanted to help out the people on the street.” 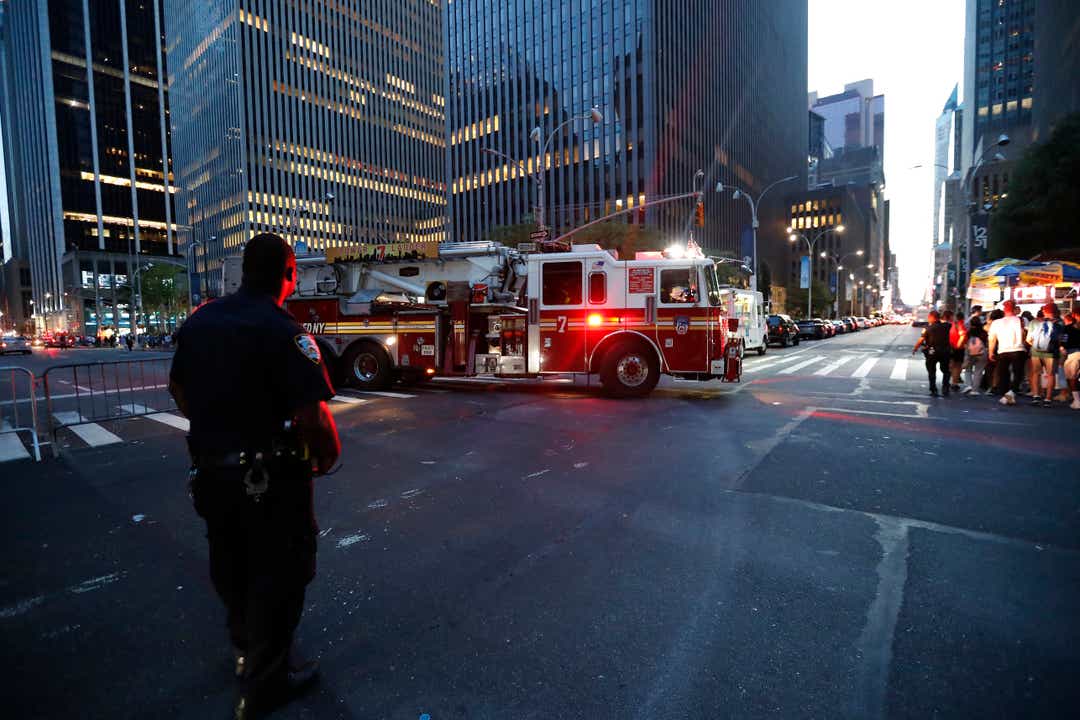 Workers at a deli on the corner of 45th Street used cellphone lights to illuminate operation instructions as they tried to get a generator running to power the bodega.  “It’s definitely an interesting experience say the least,” said Mark Rollo, 34, who works at a laundromat in the area. “Everything just went dark all of a sudden. I wasn’t supposed to get off for another hour or so, but I’m happy to be able to enjoy the rest of the evening.”  Not everyone was as enthusiastic about the outage.

Tamra Reid, 29, whose apartment building was without power, said “this whole thing is really scary. Thank god for iPhone flashlights. It’s really hard to see and that’s dangerous. What if people start stealing, mugging or worse?”  A melody of car horns and police and ambulance sirens echoed through the dimly lit neighborhood. As the , smartphone flashlights illuminated the pavement as residents made their way home.

Dozens of blocks south, on 14th Street in Greenwich Village, many people on the street Saturday night had no idea about the blackout. They were busy trying to snap photos of "Manhattanhenge," one of the few nights when the setting sun perfectly aligns with the borough's street grid. A diner on Broadway at West 69th Street lost its lights, as did other surrounding businesses.

Ric , an attorney, had just stepped off the elevator on the 44th floor of a Columbus Circle building when the building lost power. From up high, said, he can see people trying to direct traffic and prevent accidents.  Traffic in Midtown is slowed, said, but not stopped. This power outage comes 42 years to the day after The Great Blackout of 1977, which left most of New York City without electricity.

USA Power
BLOG COMMENTS POWERED BY DISQUS
Cookies make it easier for us to provide you with our services. With the usage of our services you permit us to use cookies.
Ok